Jesus’ 50 Theses To The Modern Church

Martin Luther in his 95 Theses begins with the first theses: “When our Lord and Master Jesus Christ said, ‘Repent’ (Mt 4:17), he willed the entire life of believers to be one of repentance.”

We heartily agree and are blessed by this injunction and command. (1 John 1:9)
Yet does not this repentance also mean to change our way of thinking and look at the Scriptures as God wants us to look at them?

Is it possible that everything Jesus commanded and said he meant for his followers to obey?
The reformation made great changes and freed many from the tyranny of Rome yet in some cases it brought men back under the rule of an interpretation of scripture instead of simple obedience to the scripture itself. 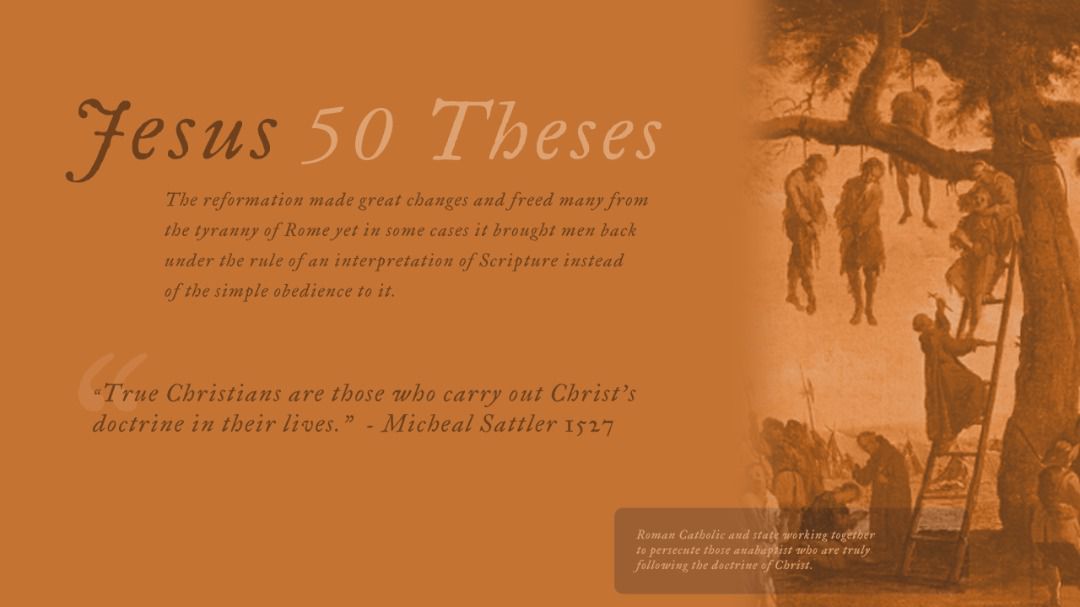 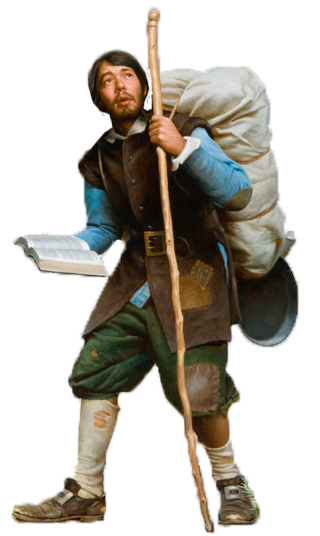 Throughout Christian history the light has shined of those who took upon themselves to truly follow the Son of God and be his disciples, his Church.
These groups have been maligned and hated by at many times the majority of the professing church.

These were simple believers who asked the question: ‘What if Jesus really meant every word He said?’ They resounded with a “yes” not in doctrinal statements or religious literature but in lives laid down in self denial, obedience and at times martyrdom itself, in following the way Christ went.

Would it surprise you to learn that not only Roman Catholics but also Protestants took part in shedding the innocent blood of true disciples of Jesus?

During the time of the reformation those who took the words of Jesus plainly were called anabaptists, they were outlawed, hunted and killed.

In 1527 one of these lights Michael Sattler, a martyr, said, “True Christians are those who carry out Christ's doctrine in their lives.”

History would be silent if it were not for the diligent retelling of their stories through books such as “The Martyrs Mirror”, “The Hutterite Chronicles” and similar volumes.

It is interesting to note that the anabaptists, along with the earliest believers, took the Lord’s teachings literally.
Jesus tells us in the New Covenant that we are no longer to take any oath. James then confirms the literal interpretation, saying in his epistle, “But above all, my brethren, do not swear, either by heaven or by earth or with any other oath...lest you fall into condemnation.” (James 5:12)

The beloved disciple John confirms this teaching, years later writing, “Whoever hates his brother is a murderer, and you know that no murderer has eternal life abiding in him.” (1 John 3:15).

We see that the Lord’s teachings in passages like the sermon on the mount are practical instruction on how we are to manifest loving God and loving others as He loved us in this, the New Covenant. (John 15:10, 12)

We therefore seek to give 50 Theses to the Modern Church.

In this world we should expect to have tribulation and problems but Jesus will give us God’s peace as we abide in Him.

Jesus commands all people to repent of their own ways and accept His ways.

We are to follow Jesus who is the head of the Church and the King of the kingdom, and not be led away by even well meaning men who depart from the teachings of Christ.

When we are persecuted as all other godly men and prophets before us we are to rejoice and be happy that we are accounted with the righteous.

As Christians we are not to be private about our faith but evangels wherever we go, through word and also good works in the name of God.

Jesus tells us that how we treat the least of believers is how we have treated Him, for we are members of His body. If we have not served others it is likely we are not of Christ.

We are to seek to reconcile with anyone we have ought with, it is our duty to seek to forgive others and offer this before worship to God.

Jesus calls looking at women with lust in your mind and heart the very act of adultery. And for us to deal strictly with this sin lest it overtake us to even hell.

In the New Covenant we are not to take oaths of any kind.

When evil is done to us we are not to resist it. But rather go the second mile and do not turn away from being defrauded or used.

Jesus calls us to love our enemies of all kinds. To bless them and do good to them.

Jesus commands us to show kindness and love to all people. For even God allows rain to fall on the righteous and wicked alike.

Giving to the poor, prayer and fasting are not to be done in a purposefully public way, in order to be seen by men, but often in secret.

In an age of unprecedented materialism we are called of our Lord to store up treasures in heaven rather than on earth. For how we deal with our possessions reveals our true heart and motives.

We cannot serve both God and money. We must hate one and love the other.

Jesus teaches us to look at our own sins and problems first. We must judge ourselves first so that we can help others after.

Jesus teaches us to not give that which is holy to those who will disregard it. Jesus exemplified this being silent at times before his accusers.

We are to ask God for our needs. He alone is our great help and source of supply.

Jesus tells us to treat others as we ourselves would like to be treated.

Jesus calls us to follow in the narrow way that leads to eternal life. And also states that the majority in the world are on the broad way to hell.

Those who are false prophets will be mostly those who look like true believers but are inwardly false and sons of Judas.

We are to pray for those brothers and sisters who are spreading the true message of the Word of God to the lost multitudes on the broad path.

Jesus calls us to be wise but also harmless. As defenseless sheep in the midst of wolves in this world.

We are not to fear men. Neither fear what they can do to the body in tortures and all types of evil devices. As our Lord will avenge all martyrs himself. Our fear must be of God alone.

Jesus repeatedly calls us to be true hearers of His Word who practice His commands.

We are to take Jesus yoke and His kingdom ways unto ourselves for only then we can have true peace.

We are to to honour our father and mother in this earth though God is our first allegiance.

False teachings are like leaven and at times are hard to discern. Jesus warns us to take heed of those who teach contrary ways of God mingled with truth.

Jesus teaches all those who will follow him to deny themselves.

We are not to despise children -- nor those who are children of God in any maturity. For all are precious to God.

If someone sins against you, Jesus teaches to seek to forgive and reconcile with them privately.

Jesus teaches that forgiveness should be always given freely to those who hurt and offend. If we do not forgive God will not forgive us.

Jesus warns against the love of money which can harm or damn one’s soul.

We are to honour marriage only between a man and a women.

Jesus teaches that a man who marries a divorced woman commits adultery. ‘whosoever shall marry her that is divorced committeth adultery’.

Jesus teaches that leaders in the Church must be servants and ministers.

God’s Church is to be a place of prayer, intercession and worship of God, not of money and man’s thievery.

When we pray we are to be believing and ask in faith not doubting. To doubt God is to slander His character and goodwill towards His children.

Jesus calls us to love and care for the poor. He will reward such deeds at the resurrection of the just.

We are to pay our taxes to worldly authorities and not cheat them.

We are to love and worship God in Spirit and in truth. Jesus’ disciples are whole- hearted worshippers of God.

Jesus shares that New Birth spiritually is the only way into His kingdom.

We are called to wait for the return of Jesus in a life of holiness and godliness.

Our Lord commands all true disciples to remember the Lord’s Supper in the fear of God. Not as a sacrament that is given to liars, thieves, those who practice sin, half- hearted professors of religion, or any of the like.

Jesus teaches us to pray against temptations and sins. For our flesh is deceptive and weak and the pull of the sinful world is strong.

If we love Jesus we will keep His commandments.

We are called to teach all of Jesus commands to those who will be His disciples and are baptized.

Jesus tells us to not just share theology or ideas but to teach people to obey His commands.

Jesus shares that we have Himself in the person of the Holy Spirit within us as our teacher and as our guide.

God’s kingdom and His right ways are to be our first focus in life.