Taking tribute from the Canaanites

Based on the outline of a sermon by Michael L. Overholt.

God had promised victory over the enemies. He had even promised to drive the enemy out with hornets if Israel was just faithful in their part of the covenant (De. 7:20).

Joshua, that great man of God, was dead. His work was finished. He had been faithful. He had led this ragtag group, these sons and daughters of slaves, into battle. He had turned them into tough, seasoned warriors. He had been there, a strong figure, someone to lean on when things got bad. Now he was gone.

Joshua was gone, but the work was not done. There were still enemies around. The people whom God had commanded to be driven out were still living on the back doorstep. Their idols still hung over the doorposts in many homes. Their idolatrous practices were still being acted out in their pagan temples. Their lifestyle was still a threat to the people of God. The work was not finished; it had just changed hands, from Joshua to the next generation. It was now time for Deuteronomy 7:1-6 to become reality:

When the LORD thy God shall bring thee into the land whither thou goest to possess it, and hath cast out many nations before thee, the Hittites, and the Girgashites, and the Amorites, and the Canaanites, and the Perizzites, and the Hivites, and the Jebusites, seven nations greater and mightier than thou; 2 And when the LORD thy God shall deliver them before thee; thou shalt smite them, and utterly destroy them; thou shalt make no covenant with them, nor shew mercy unto them: 3 Neither shalt thou make marriages with them; thy daughter thou shalt not give unto his son, nor his daughter shalt thou take unto thy son. 4 For they will turn away thy son from following me, that they may serve other gods: so will the anger of the LORD be kindled against you, and destroy thee suddenly. 5 But thus shall ye deal with them; ye shall destroy their altars, and break down their images, and cut down their groves, and burn their graven images with fire. 6 For thou art an holy people unto the LORD thy God: the LORD thy God hath chosen thee to be a special people unto himself, above all people that are upon the face of the earth.

What happened? How did it all play out? 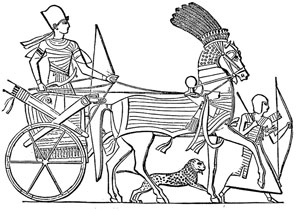 What did chariots of iron have to do with losing a battle?

Judges 1:16-36 tells us the story of the Israelites getting bested by their enemies on several fronts. Due to space constraints we will not print those verses here, but please familiarize yourself with them. What we want to focus on for the moment is verse 19. Judah could not drive out the inhabitants of the valley because the inhabitants had “chariots of iron.” What did chariots of iron have to do with it?!! We read in Joshua 17:18 that having chariots of iron was of no significance at all in the conquest of Canaan:

Our victory does not hinge upon the strength of the adversary; our victory hinges upon the promises of God!

Continuing on in Judges 1, we find in verse 21 that Benjamin did not drive out the inhabitants of Jerusalem. In verses 27-36 we also find the sad commentary that the Israelites had the upper hand on their enemies. They could have destroyed the enemy, but they didn’t. Why?

Perhaps Israel judged themselves to be strong in their own might. They had won battles. They knew how to fight. Maybe they had learned how to talk and reason as well. Why destroy all the enemies? Why not put them to tribute? Could the enemy not serve us better in that capacity than if they were dead?

In many ways, they were strong. The men of Israel had experienced many things. They recalled hearing their fathers tell stories of Egypt, and of the Great Deliverance. (Those aged 45-65 had experienced it firsthand.) They knew of the plagues. They knew the stories of the crossing of the Red Sea. They had firsthand knowledge of the complaining ways of their parents and they knew of the awful punishment brought upon them. They had lived under the terrible desert sun and choked on the desert dust. They had held their fathers and mothers in their arms and watched them die in that horrible wilderness. With their last breath, many of those parents had once again recounted to their offspring the “why” of it all—“We disobeyed God.”

These men had seen the walls of Jericho come down. They had fought with the enemy and won. They were conquerors. They had come up from the bottom. Sons and daughters of slaves, they were now owners of their own vineyards and fields. Their fathers had felt the whips from the taskmasters in Egypt. (They had heard these stories around the campfire at night.) Now the whips were placed in their own hands. And it felt good. They were strong; they were in charge of their own destiny.

But they failed to reckon with one thing: The life of their posterity hung in the balance, and that life hinged upon their obedience to God.

That the land spue you not out

The Israelites should have taken heed to Leviticus 20:22:

Ye shall therefore keep all my statutes, and all my judgments, and do them: that the land, whither I bring you to dwell therein, spue you not out.

Sadly, that is exactly what happened. The original Israelite conquerors could survive in a land where the enemy dwelt. They were indeed strong enough to pull it off. But that did not stop the consequences. Their children had not had those same unique experiences that had made the original conquerors strong. They could not stand.

Judges 2:7 and 3:5-6 tell us “the rest of the story.” The children of Israel ended up with enemies living among them. The seed sown by the parents, by the strong conquerors, took root downward, and bore fruit upward. But the fruit was not the desired fruit! They had planted the wrong seed!

That was them and then. But let’s talk about us and now.Do we at times make the same mistake? We have been brought into a land that flows with milk and honey. We have been given much. But the land which we have been given is never ours entirely by inheritance. Each generation is responsible to deal with the enemies that threaten this good land. Each generation is responsible to maintain the borders, because that is where the battle is fought … at the borders.

But each generation is also tempted to make alliances with the Canaanites. And each generation faces the temptation to “take tribute” from the enemy instead of putting the enemy outside the camp. We are tempted to take of the forbidden fruit and turn it into a tributary, something we can use for our personal satisfaction and, hopefully, for God’s glory.

Too often we take what we should identify as our enemy and call it our ally. We take that which should be cast out of the camp, and instead of dealing decisively with the issue, we take it, hold it, and put it to tribute, trying to force the unholy to serve us in a holy cause. But those decisions make the life of our posterity to hang in the balance.

What am I talking about? Any example I give, I give at the risk of being a bit simplistic. There are seldom, if ever, single issues that turn the whole ship about. But so that you know where I’m coming from—what I believe to be happening—I’ll risk it and get a little practical. The following examples are areas in which I fear we’ve borrowed from the enemy camp. We’ve looked at the enemy, admired their organization, their way of doing things, and we’ve attempted—whether consciously or unconsciously—to bring those borrowed items into our camp. We have attempted to put to tribute that which possibly should be cast totally out of the camp. Many of these issues touch at the heart of my (and my parents’) generation. I wish to be sensitive, but I also wish to be honest. 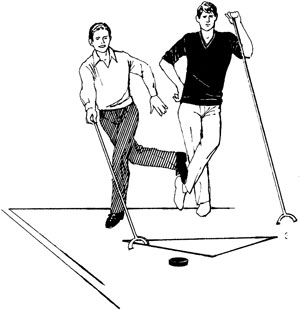 God forbid that we should seek to retire at 70, go to Florida, and while the time away playing shuffleboard!

The bold print giveth, but the fine print taketh away.

Everything comes with a price tag. However, there are two price tags on every item we purchase. One is the price that goes to the clerk at the counter. The other is the price we pay forever. What is the fine print on our abundance of gadgets? After we read the fine print, can we afford to purchase what our pocketbook can stand?

These applications may seem stringent. Maybe you don’t agree with some of the applications I have made in this article. That is okay. Don’t let your quibbles with my applications stop you from seriously considering the principle at stake here. The principle simply stated is this:

Taking tribute from the Canaanites comes at a tremendous cost. That which God identifies as my enemy is my enemy, no matter if the enemy dresses in silk.

Lest we leave you with a bleak picture, let me show you two pictures from Scripture that give a different view on life. Judges 1:20 gives us a glimpse of the “other side” of this message:

And they gave Hebron unto Caleb, as Moses said: and he expelled thence the three sons of Anak.

The sons of Anak were giants. That didn’t stop Caleb. By this time he was an old man, 85 years old. The numbers of giants had increased since he had first offered to fight them. But he had no eyes for the enemy. He had only eyes for God. He didn’t stop to ask questions. He didn’t stop to reason this thing out. He didn’t stop to ask if he might not be better off to save them alive so they could work for him as slaves. (What muscles those guys must have had! They could surely be put to work …) He knew the promises and commandments of God. He had a work to do. He simply got to work. His obedience profited not only him, but his posterity.

2 Chronicles 15:8-9 tells the story of another man who did what God said to do concerning idols:

And when Asa heard these words, and the prophecy of Oded the prophet, he took courage, and put away the abominable idols out of all the land of Judah and Benjamin, and out of the cities which he had taken from mount Ephraim, and renewed the altar of the LORD, that was before the porch of the LORD. And he gathered all Judah and Benjamin, and the strangers with them out of Ephraim and Manasseh, and out of Simeon: for they fell to him out of Israel in abundance, when they saw that the LORD his God was with him.

God’s people have always had to make hard choices. Dealing with giants and idols is nothing new. Let us, like Caleb, rise up with strength and courage to deal with current issues that threaten God’s kingdom. And let us, like Asa, deal decisively with the idols that threaten our hearts. When we do, we will see God’s kingdom grow and prosper, both now, and in our future generations. ~